The  Jetbeam HR30 is a light-weight and high-performance unique headlamp for hiking, climbing, camping and construction operation. It features USB Type c Fast charging and versatile with a clip and tail magnet function. it is very easy to operate. Fitted with professional wide-range floodlight, plus red light and SOS. HR30 with excellent durability and resistance to impacts is used in  kinds of complex hiking and camping environments.
We believe Jetbeam HR30 is perfect choice for your outdoor life.

l  Versatile with a clip and tail magnet function

This is my first light from Jetbeam that I have reviewed. It’s a new headlamp design from them and the first light I have tested with USB-C recharging. It’s really nice to see USB-C starting to make it’s way to flashlights as it’s the new standard. Thanks to Jetbeam for sending this to me to look closer at.

Full Image Gallery for this Review: https://imgur.com/a/pps2Oqk
The YouTube version of this Review:

Packaging
My packaging got a little mangled in international shipping but the just of it is a relatively large box with images of the light front and relevant info on the back regarding ratings and runtimes. Inside is a large plastic try housing the HR30 Headlamp, Jetbeam branded battery (2600mAh), unassembled head band and bracket, pocket clip, 2 spare O rings, a USB 3 to USB-C cable, relevant paperwork (Manual, warranty card). This is on par with Nitecore packaging but not up to Olight standards as of late. 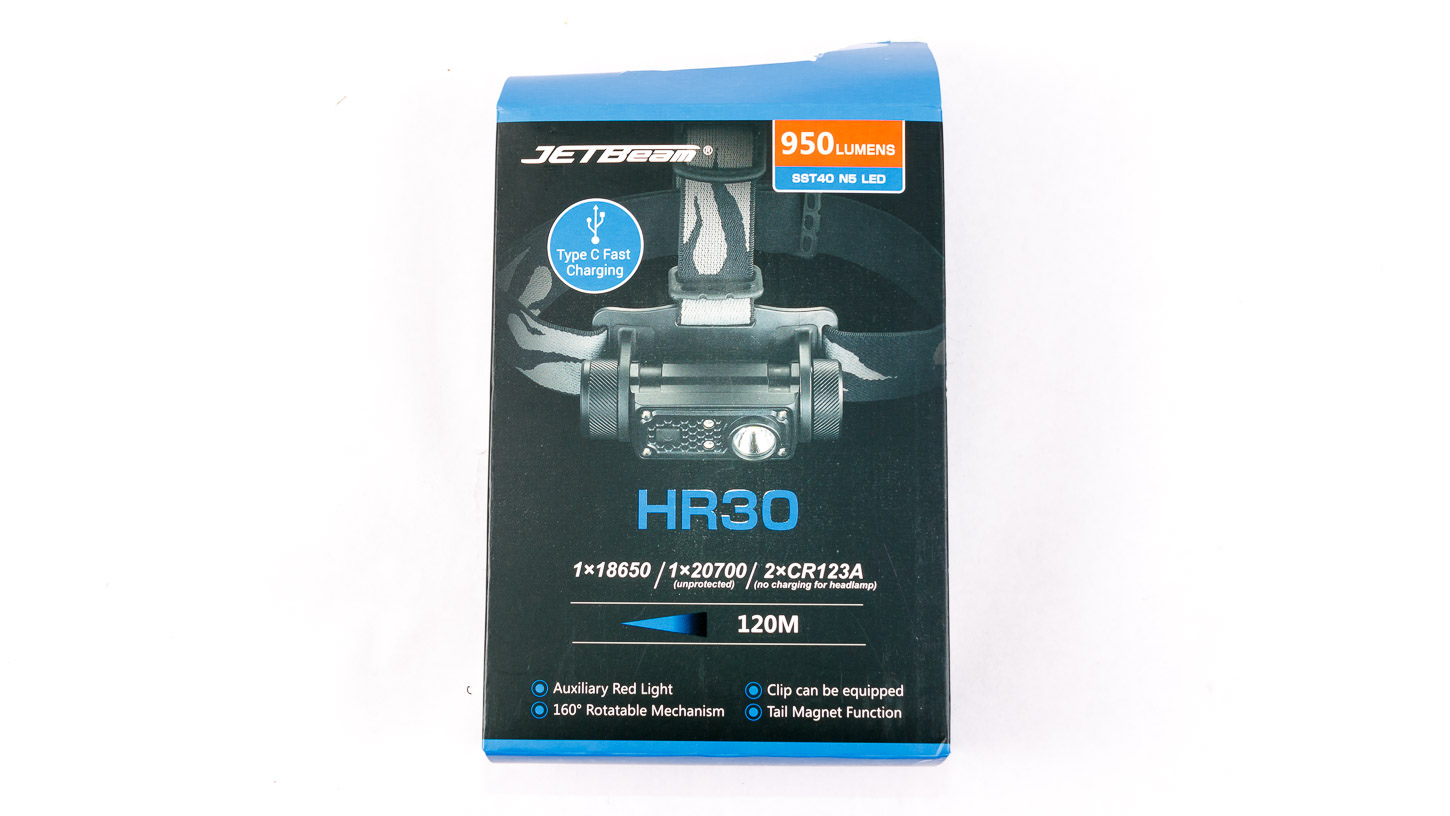 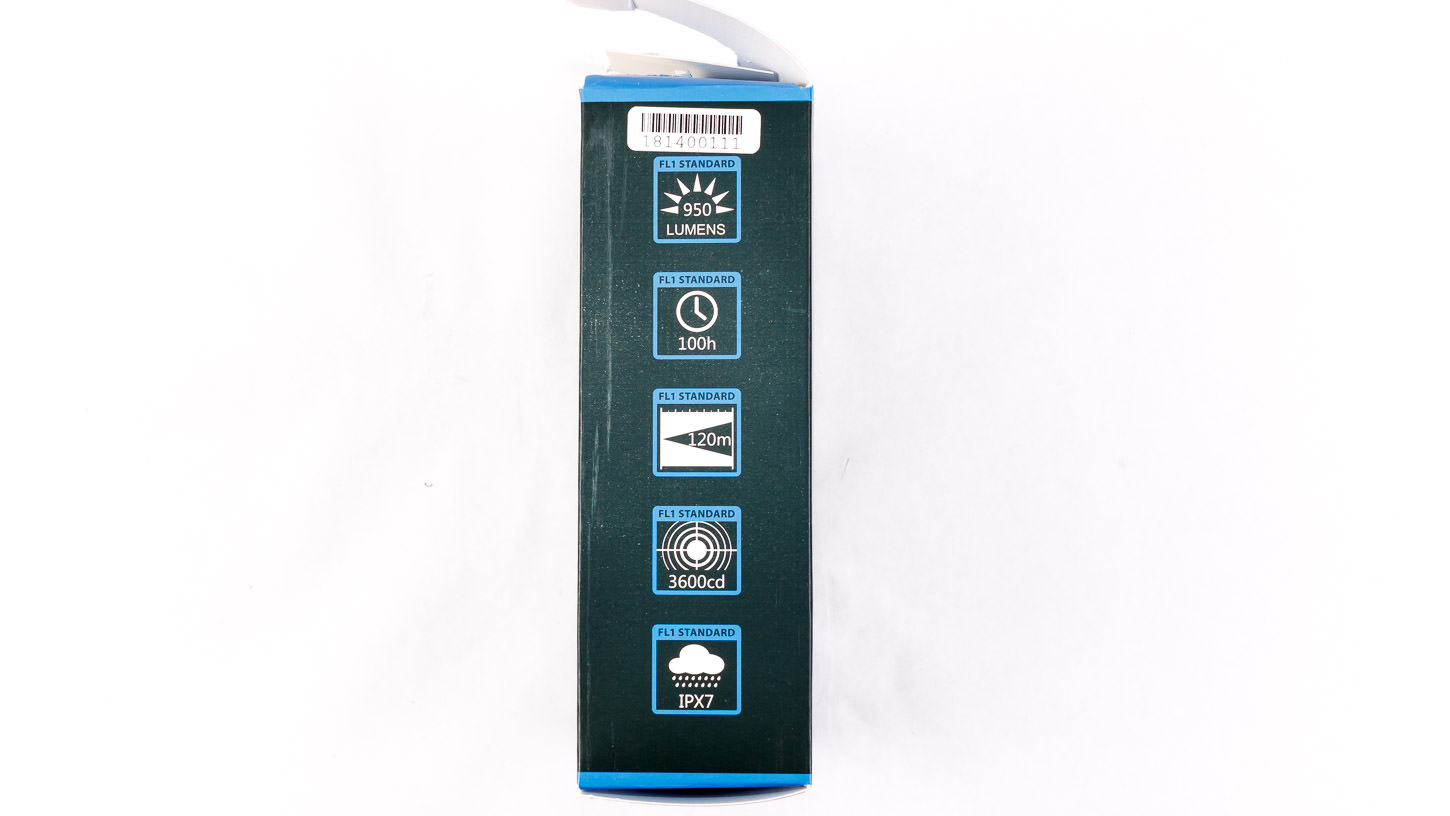 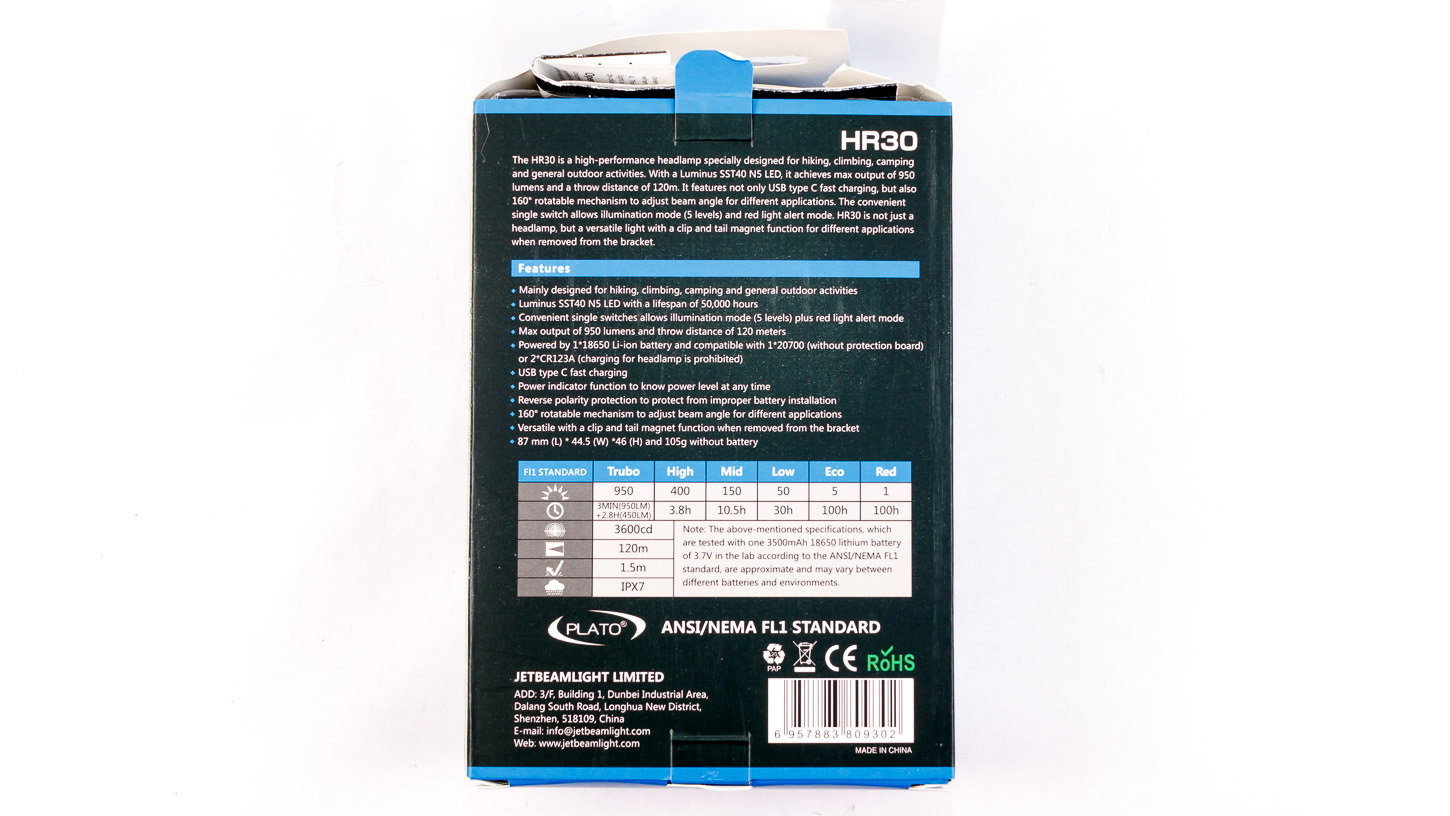 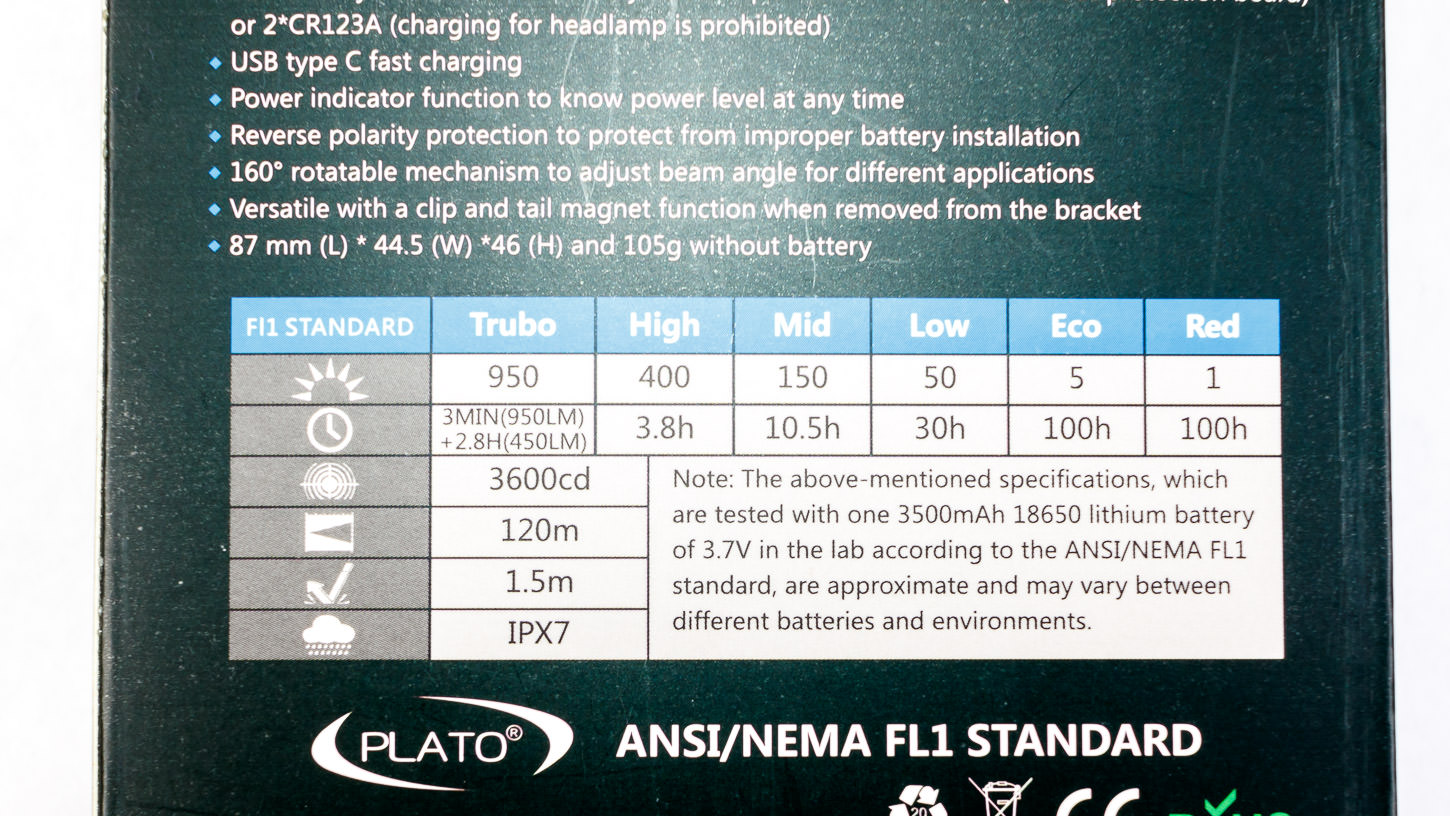 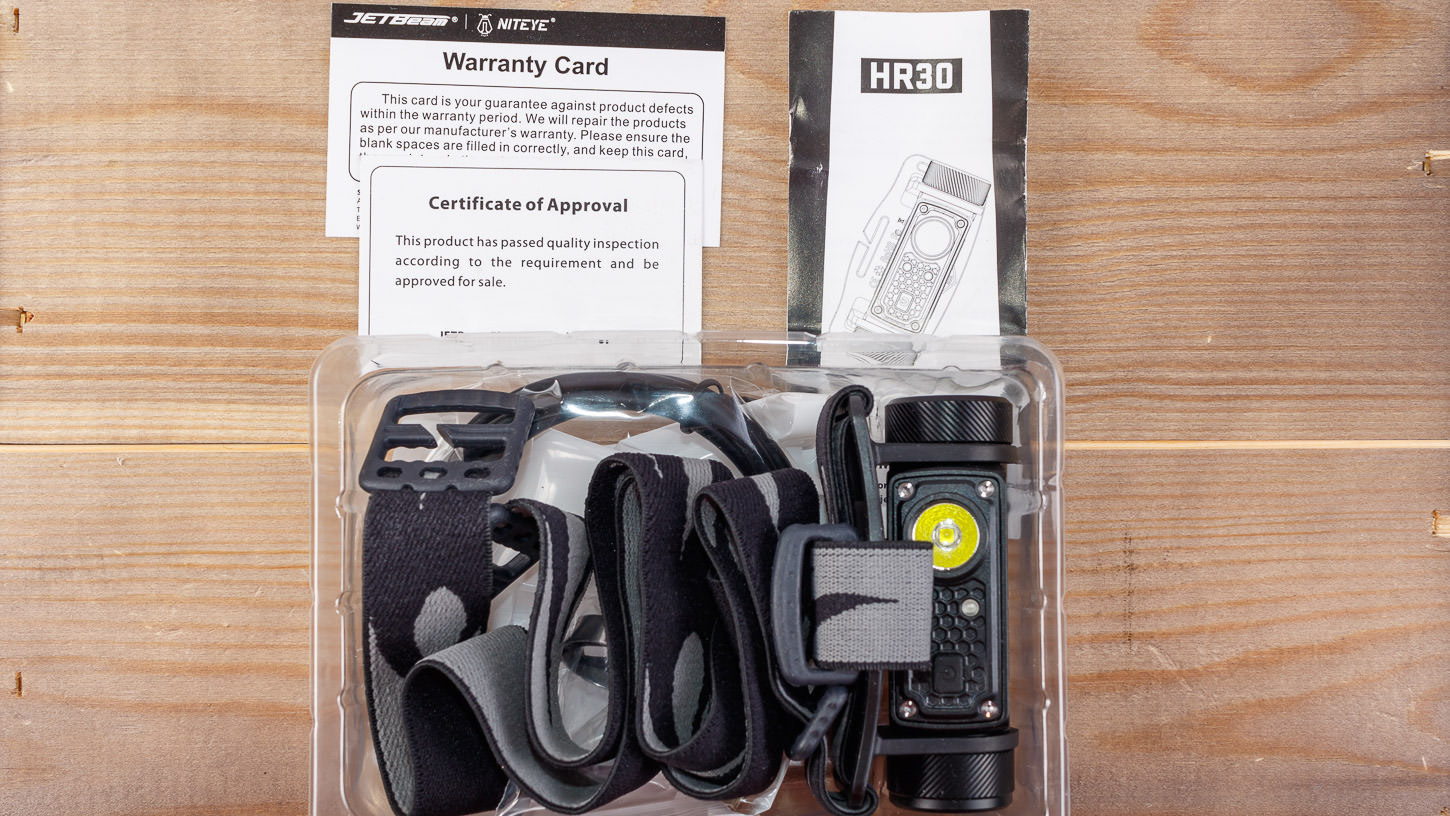 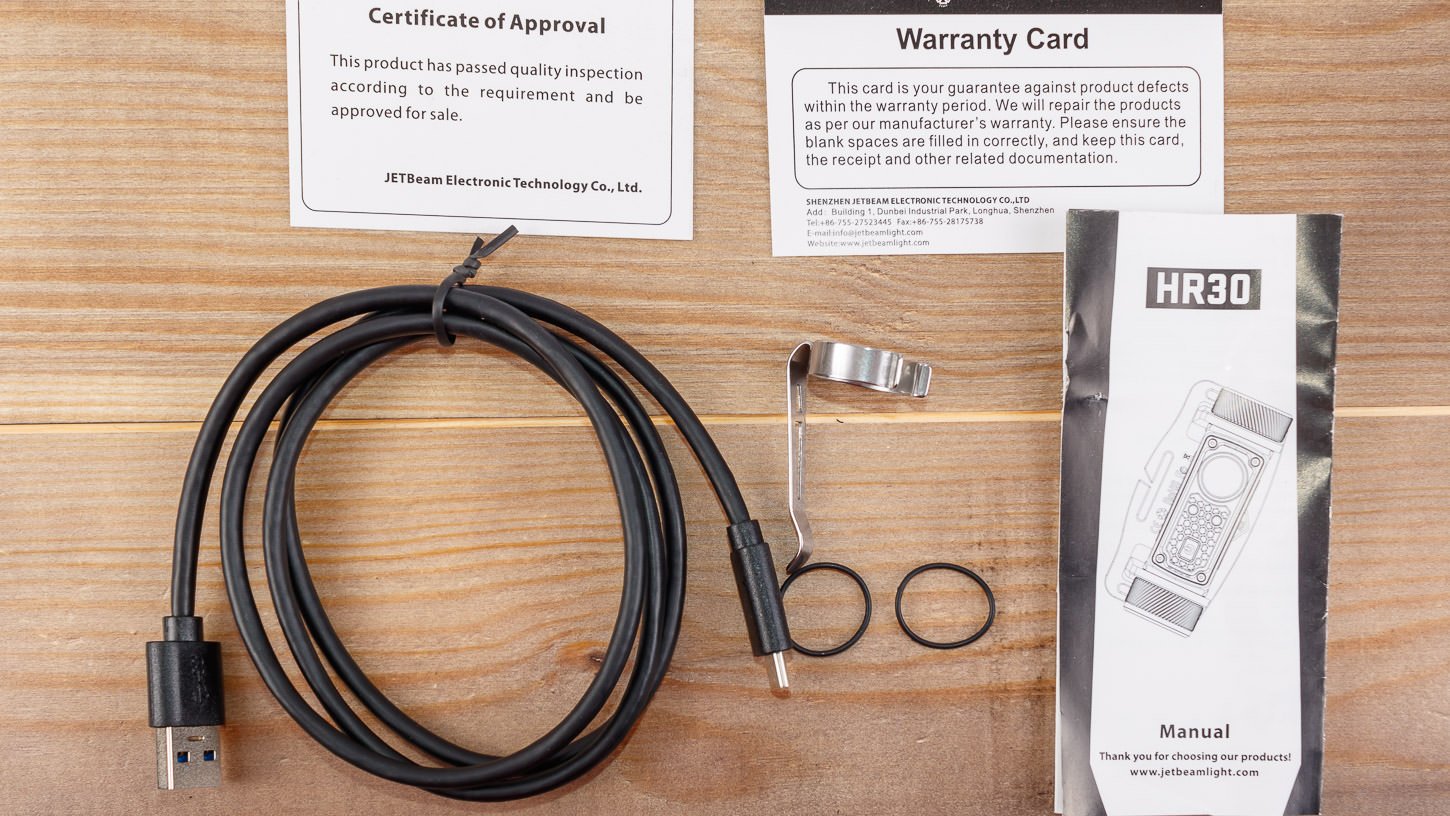 Construction
The body of this light is built with aircraft aluminum that’s hard anodized. The part around the front with the button and LED is black plastic with a hexagon pattern in it that’s visually nice. It is held in place with 4 very small 0.050 inch hex screws. The button is rubber coated and clicky, the lens and main LED extend a bit. It’s a relatively small lens and reflector. The red LED are flush. 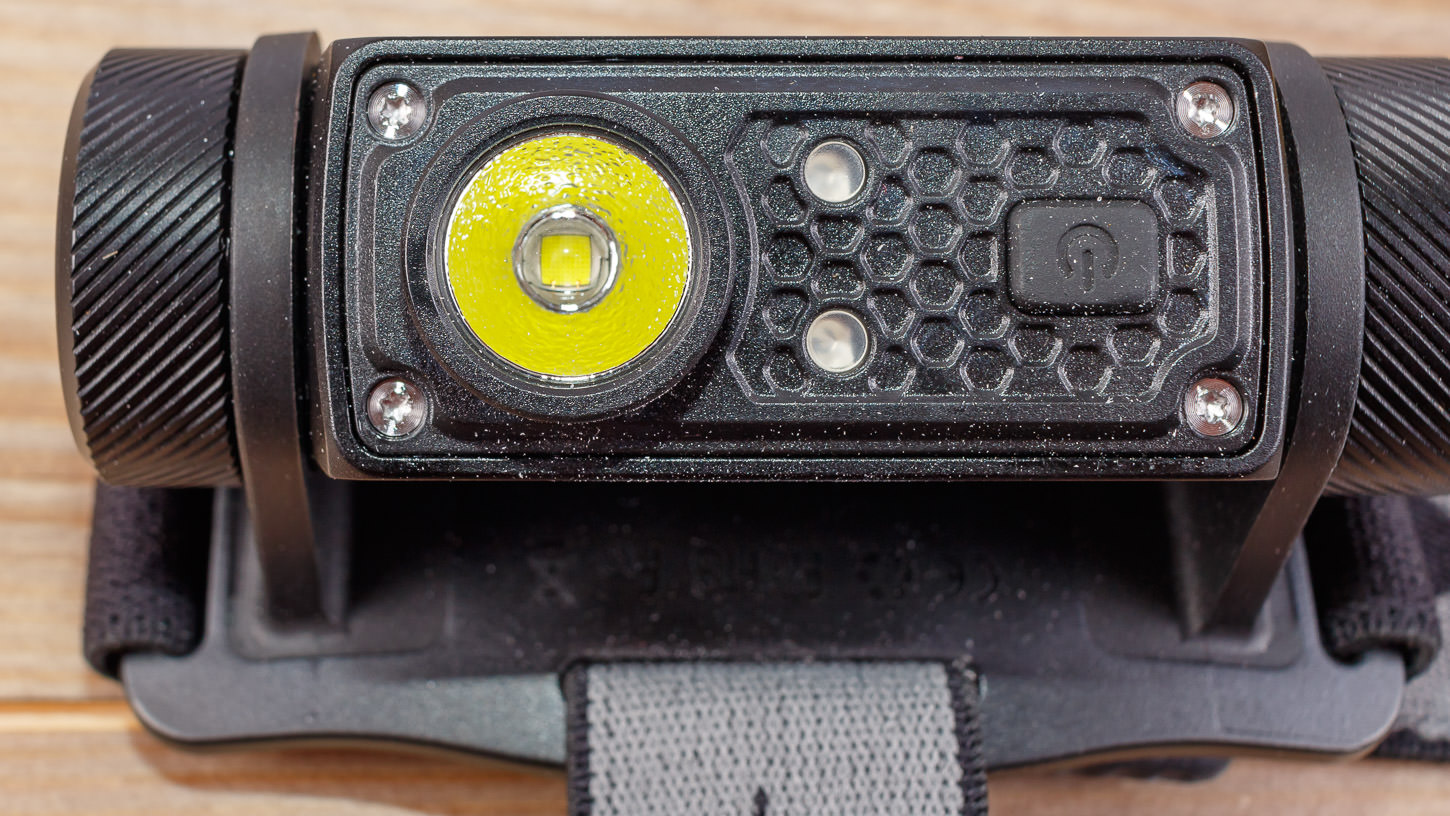 The body tube is flanked by two nicely machined end caps that are asymmetrical. They have spiral knurling that’s one direction and go in different ways from each other. This looks great but isn’t very grippy. The larger end that has the USB-C charging under it is magnetic enough to hold up the light and battery but not with the strap attached as well. The other end the tail cap has a spring under it to hold the battery in place and allow for the 3 types of batteries to be used in the light. Threads under each tail cap are standard design, relatively small and well greased from the factory. The central section of the light is ribbed. This when in the head strap is what holds the light in place and allows for rotational adjustment. The light has markings on each tail cap and some on the body. Each are helpful and less about marketing or legal phrases. 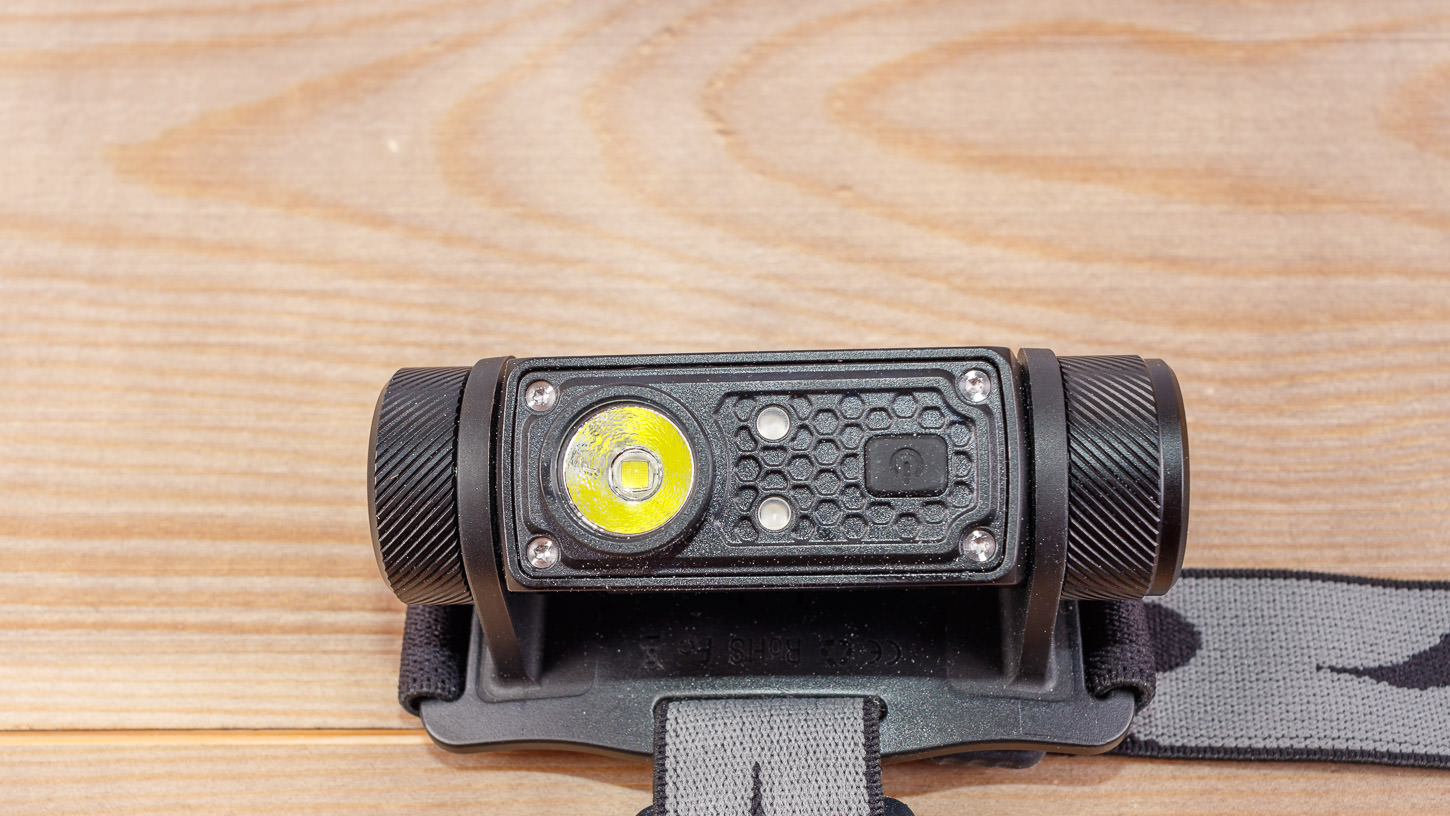 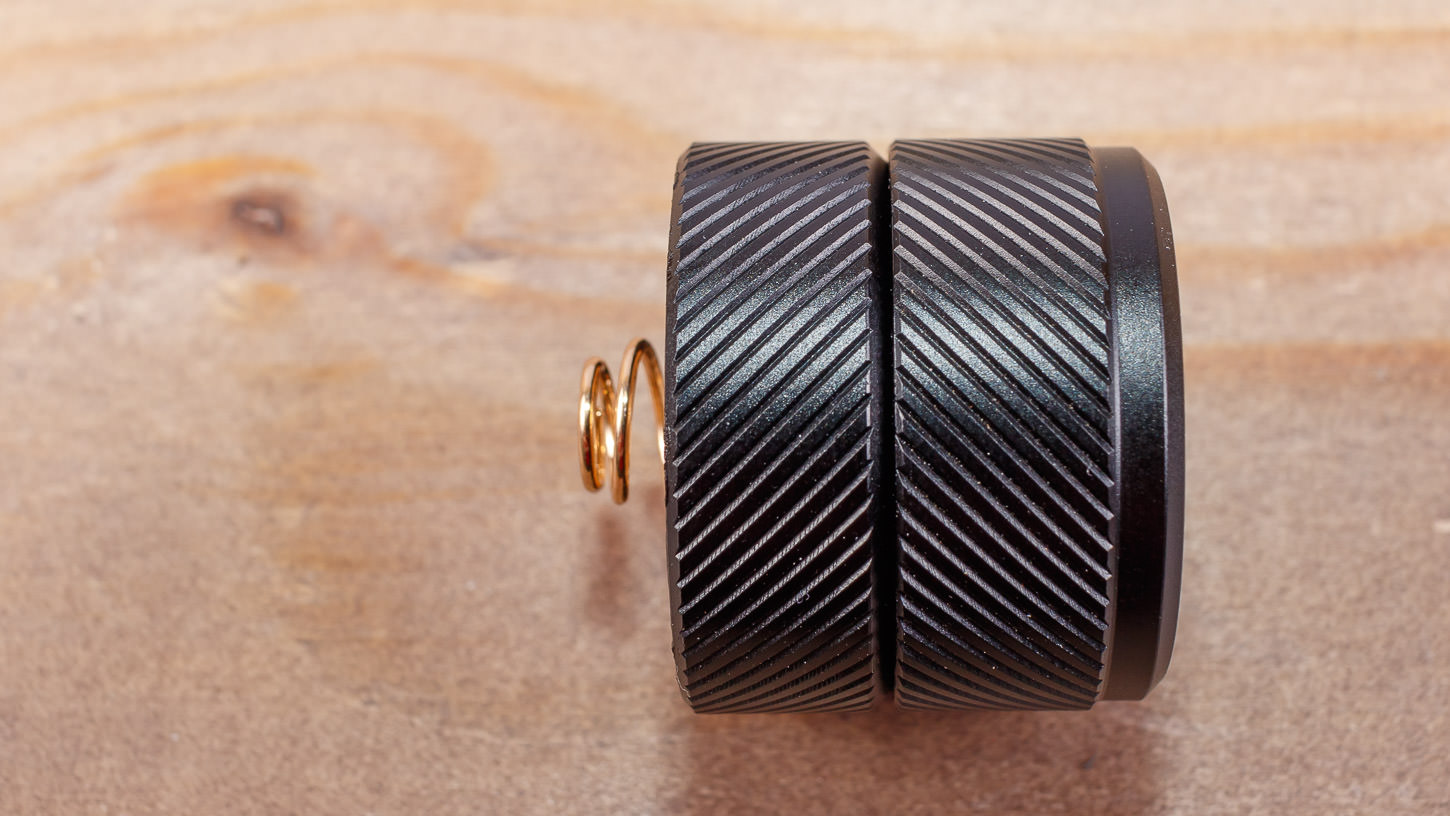 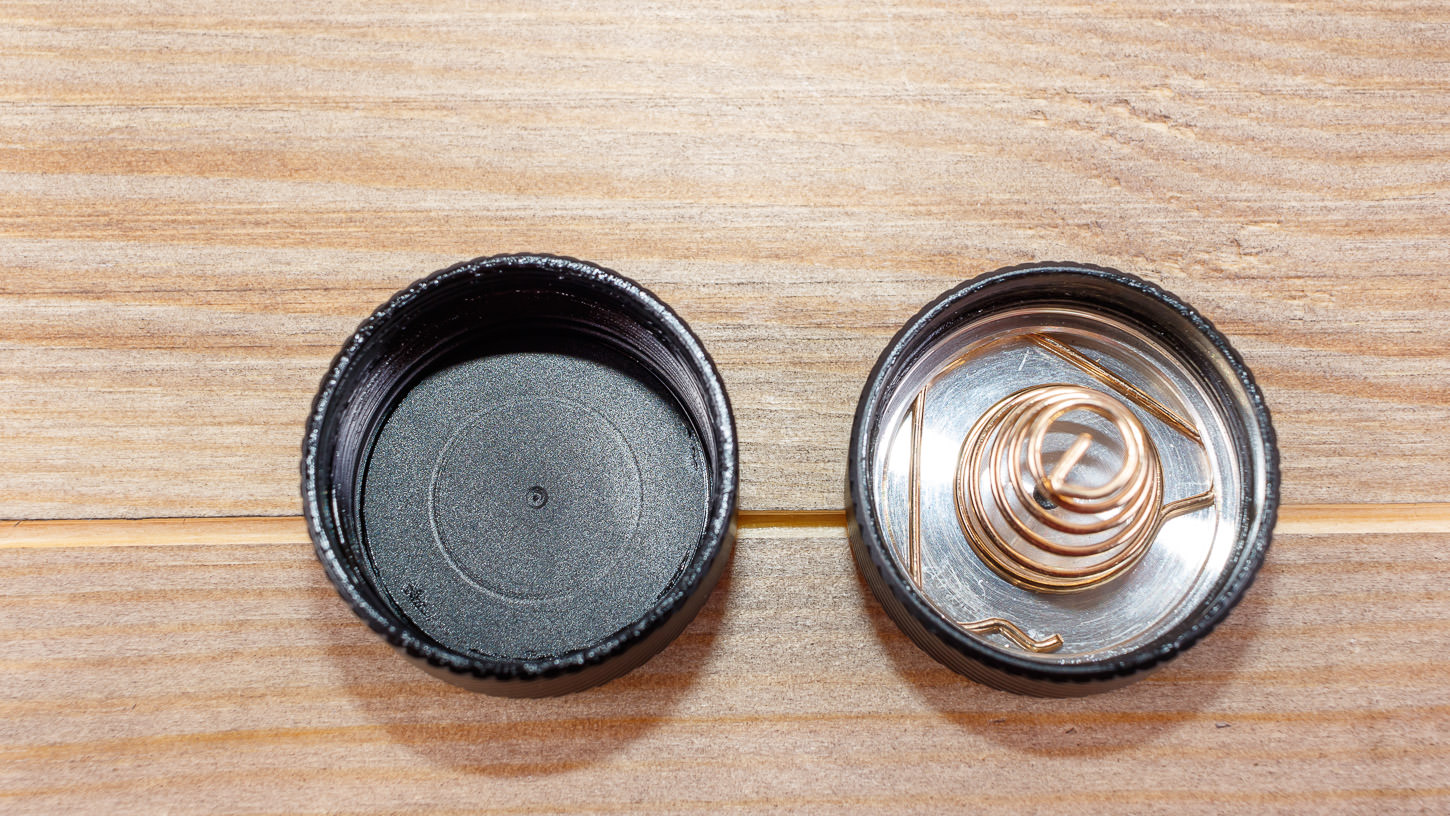 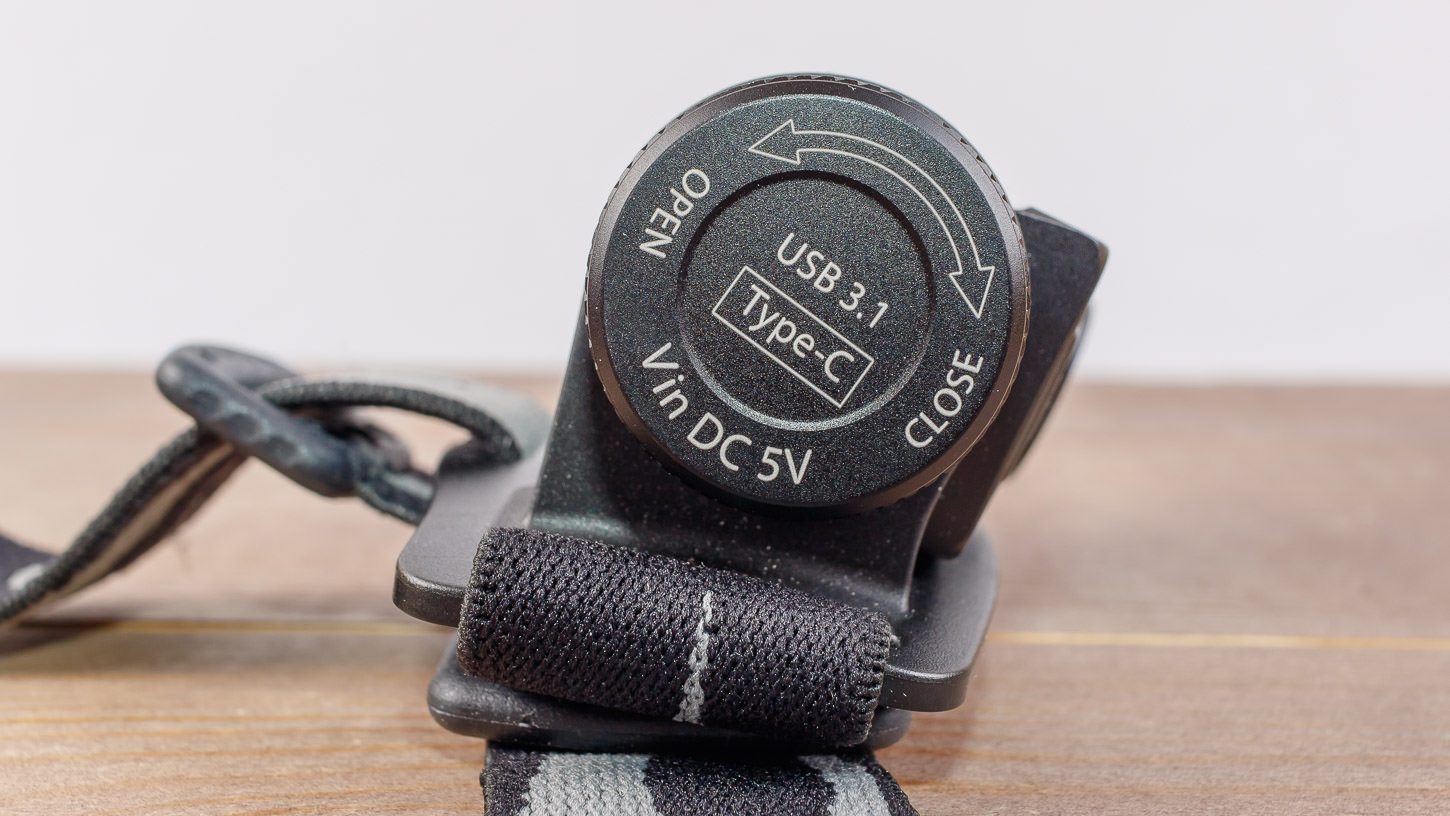 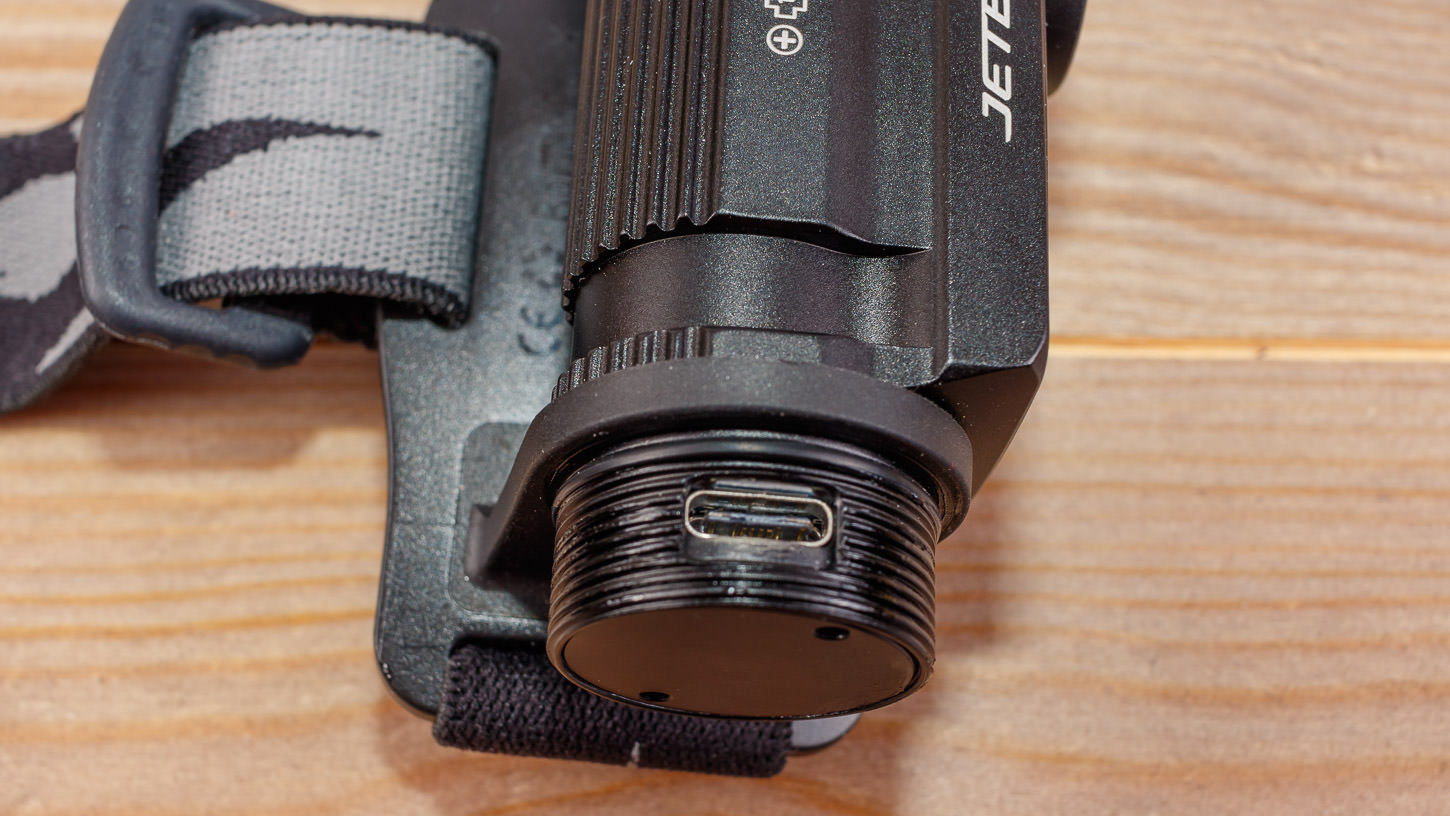 The head strap on this light is 3 strap design. The top strap is not removable due to the fused clips at each end. It comes partially disassembled. It’s a black and gray elastic with no additional reflectors or branding other then what look like flames. The front that actually holds the light is interesting. It’s built fairly stiff plastic with the strap providing the only padding on your forehead. The two hoops are injection inserted and a much more flexible rubber. To attach or detach the light remove each end cap and it slides on with some force. Not the easiest thing to do and it’s definitely a two handed job. The little triangle in the center is what holds the light in place as it rotates in the holder a full 160 degrees. 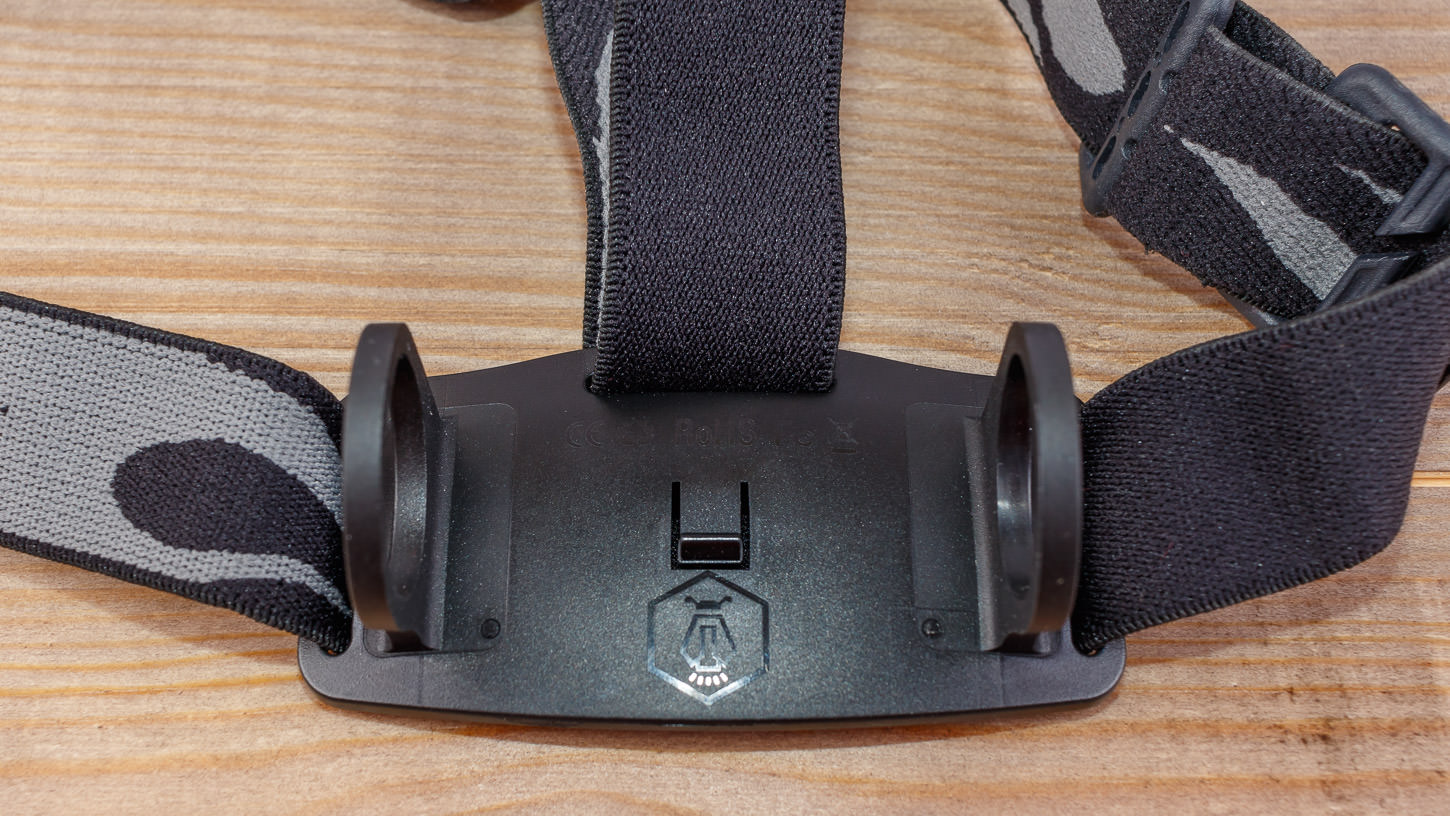 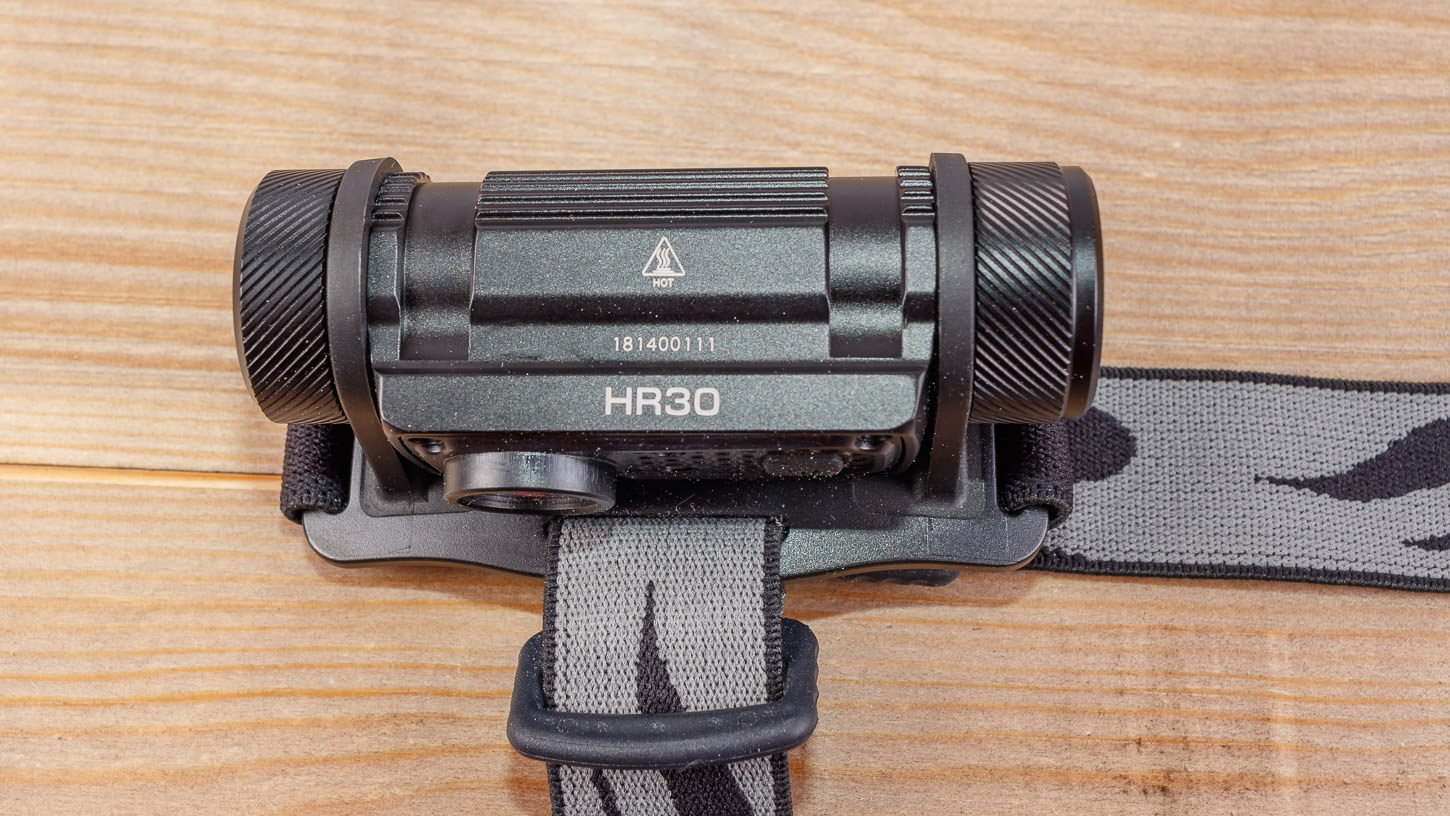 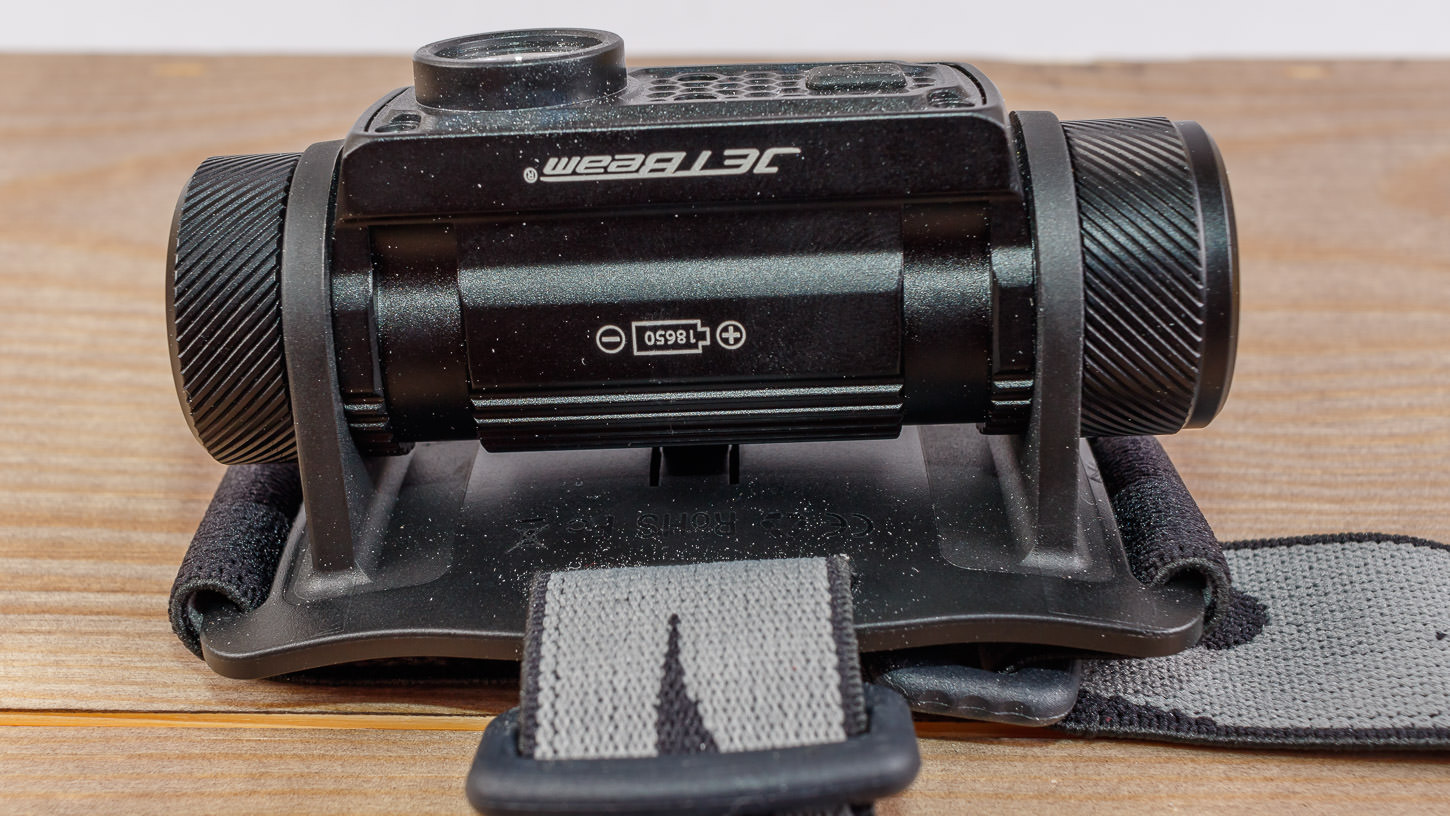 This light includes an optional clip. Less for EDC and more for clipping on to a pack or bag. It’s pretty stout and stiff and works well. The only negative is that you have to remove the headband prior to attaching the clip. 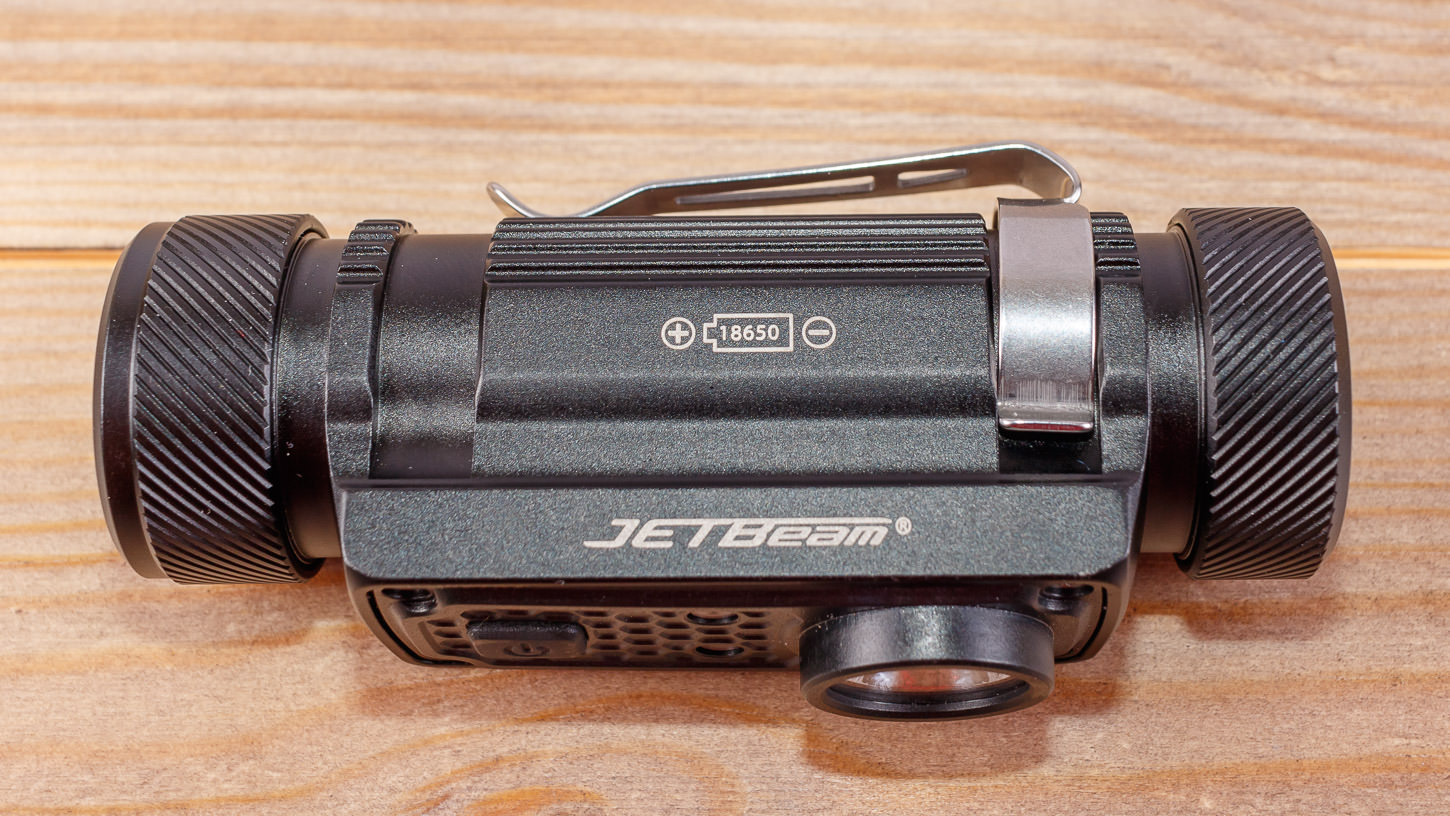 Weight as shipped with the included battery without strap or clip is 110G, with the 20700 battery it’s 124G.

This isn’t the lightest or smallest in it’s class but it’s not extreme either. I think it’s solidness and ability to take a 20700 make up for the additional weight. 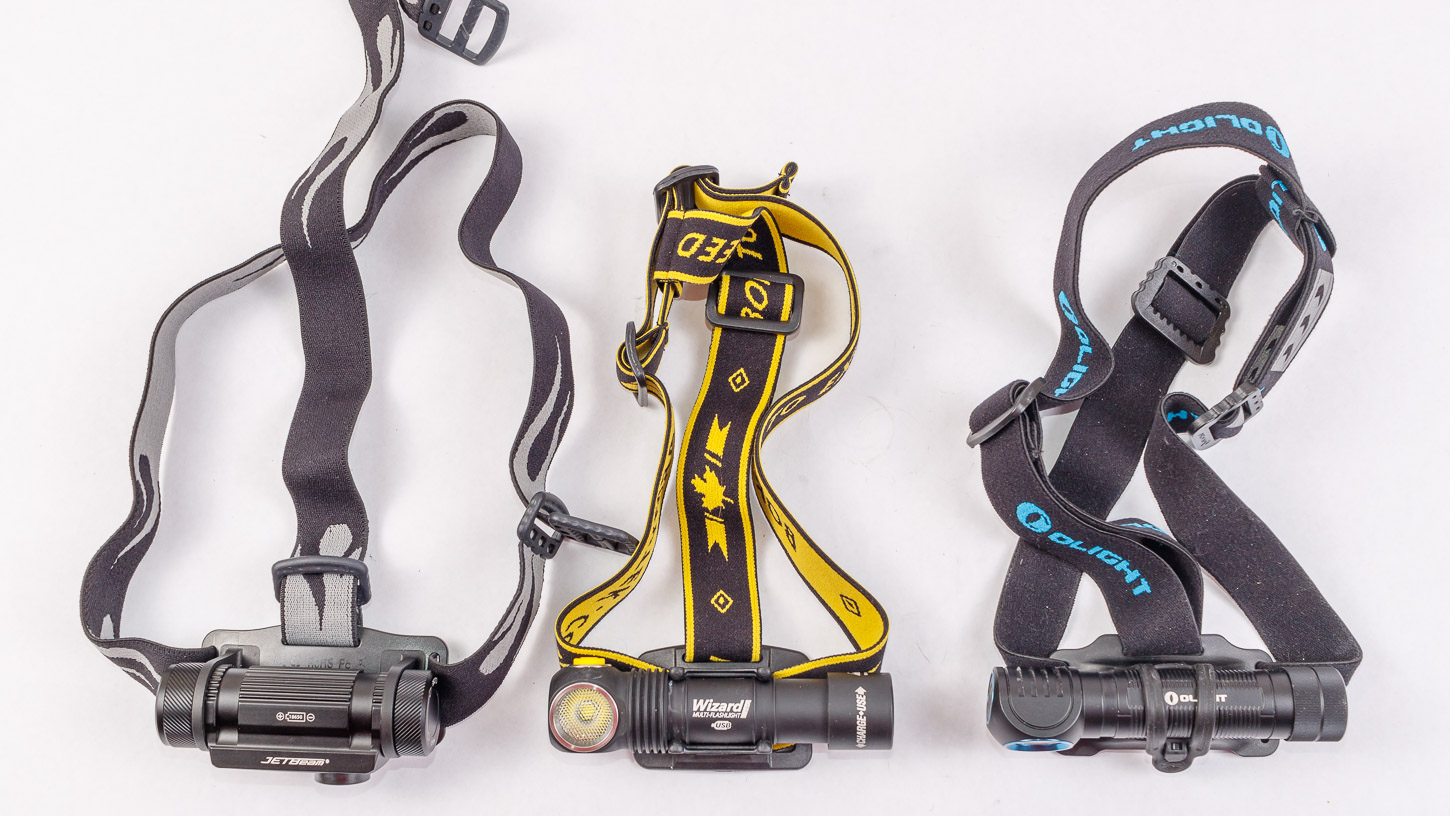 LED + Runtimes + Temps
This light uses a Luminus SST40 N5 LED. No color temperature is given by jetbeam. It’s on the warm side but there is a pretty strong green tint to it. Inside this bothers me outside, especially against grass or trees with leaves it’s less noticeable. Not my favorite tint. From reading about this LED CRI is about 70. It’s not an LED that is in use much. 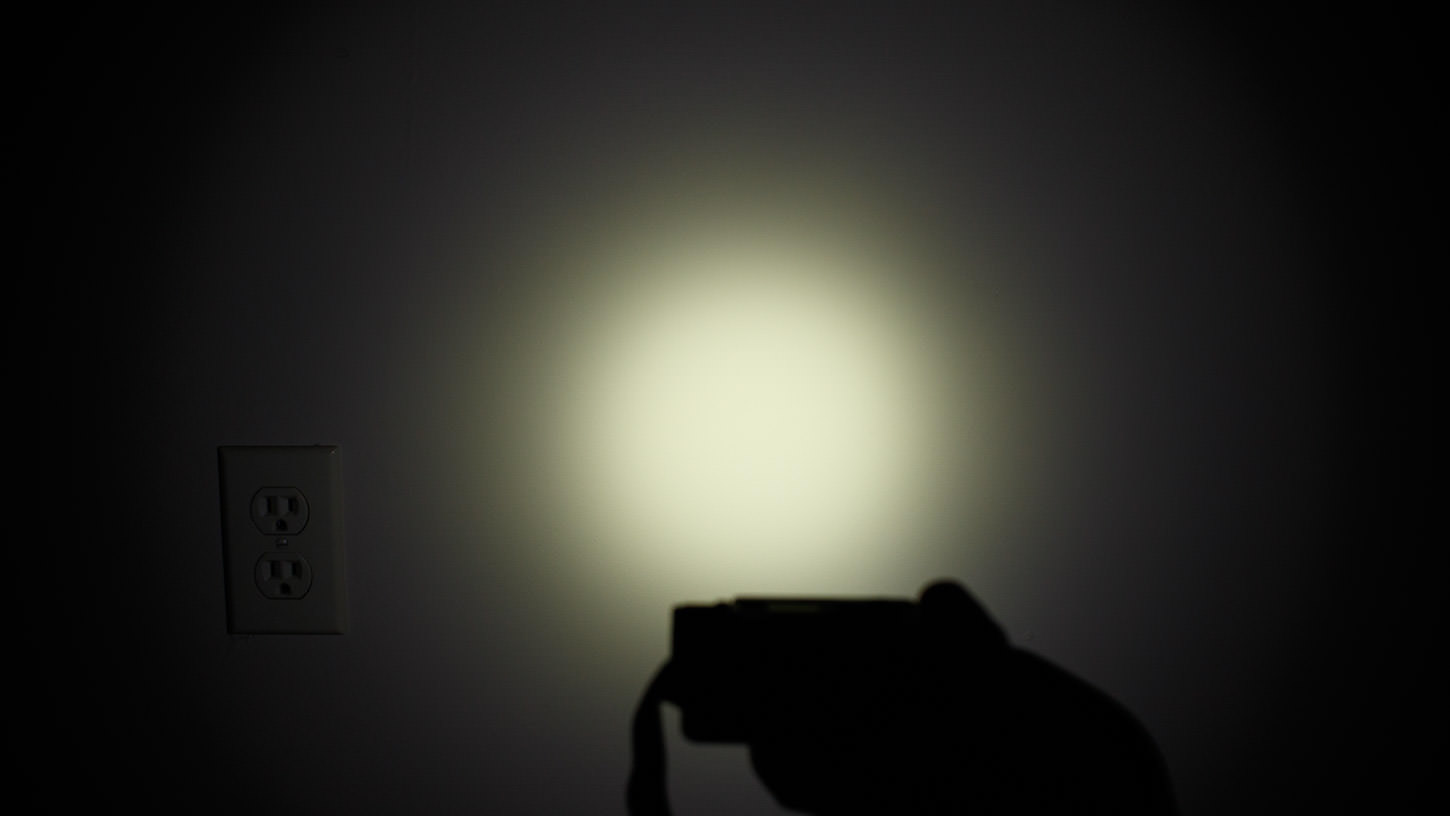 The beam is pretty smooth after about 10 feet and really throws well for how shallow the reflector is.

UI
The UI of this light could stand a bit of tweaking in my opinion. To turn it on from off you have to press and hold about ½ a second to come on. If you do a quick press from off you get battery check mode. I found myself getting into this alot at first. Once on in normal mode you are presented with memory of where you last were. By default it starts off in Eco = 5 Lumens, then to Low at 50 lumens, mid at 150 Lumens, High at 400 Lumens and Turbo at 950 Lumens. Last mode up in the normal group is a red. I found red to be just the right brightness. Enough so you could see your feet and 1-2 feet in front of you but dark enough to no feel like it was too bright to read a map.

The light does have low voltage indication where it starts blinking the Red LED’s when power drops below 20%. Problem is this is hard to see unless you have something up close.

I would like to see some shortcuts added, double click to turbo and triple click to red. Take red out of thee normal modes and maybe quad click for battery check instead of a fast press.

Battery Compatibility
This light can take 3 different battery types. It comes with a button top Jetbeam branded 2600mah battery. When in use with this cell there is an included small plastic sleeve to keep things from rattling. You can also use 2 CR123A cells which I suspect will rattle a bit due to the smaller diameter. The light can also use an unprotected 20700 battery without the sleeve. THe battery tube itself isn’t in the center. It’s off axis and slightly cam shaped.

Parasitic Drain was measured at 4.0uA.

Runtime on the included 2600mah
I tested runtime with the included JetBeam branded 2600mah battery. Turbo predictably ran for 3 minutes before falling rapidly to about 55% of relative output for a large bulk of the time. For the next 130 minutes it was fairly stable. At the end I saw one more large decline in output to 20% relative output and then the light shut off due to low voltage protection. During the batteries last 20% the red LED’s flashes letting you know the power was low. Total runtime was about 145 minutes on 2600mah. 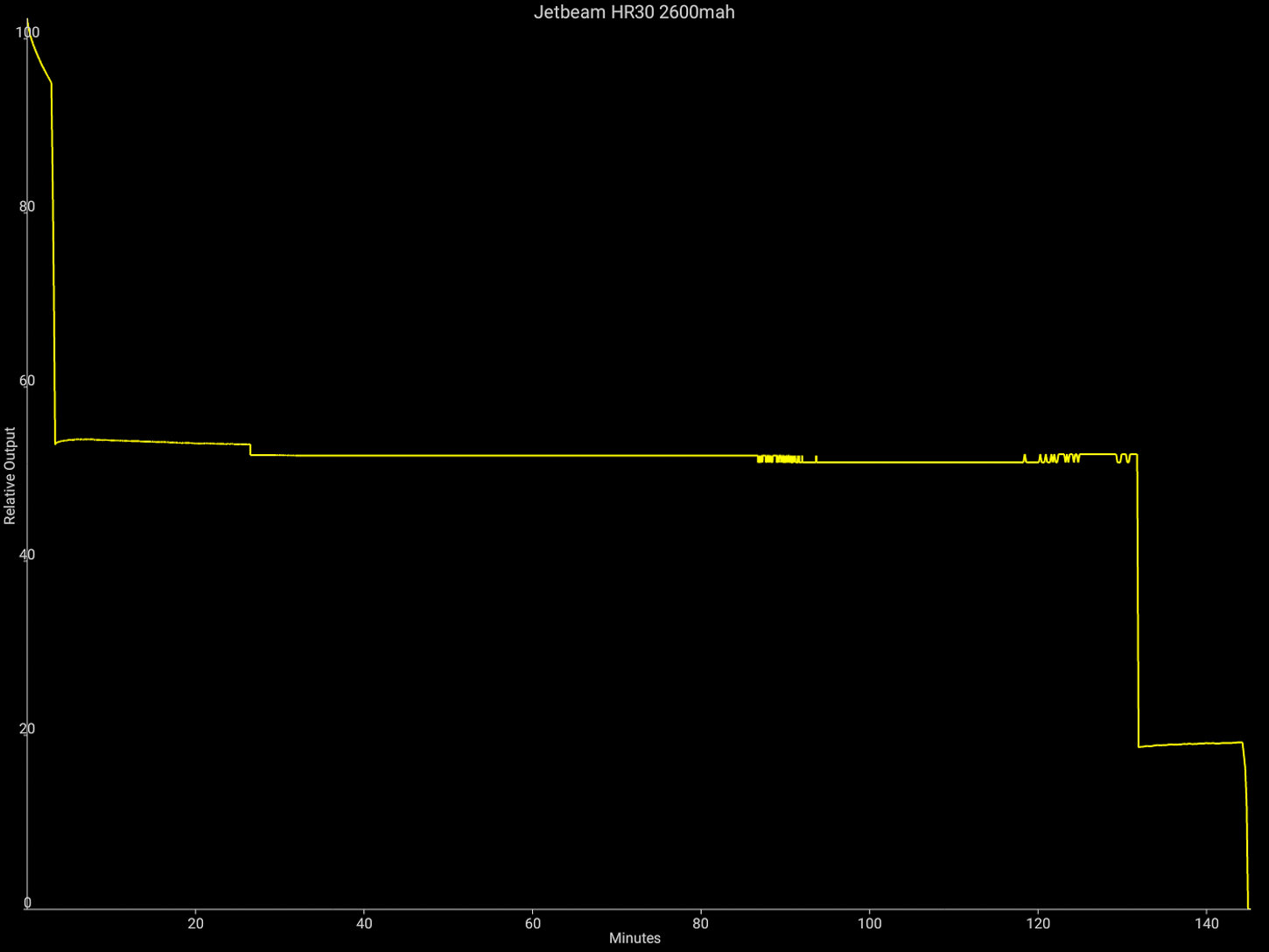 Runtime on a 20700 battery
Thanks to reddit user /u/mcfarlie6996 for sponsoring a 20700 battery for me. I didn’t have one (Or have any lights that took them) and it was great to test how much more runtime you can get with minimal size and weight differences between an 18650 and 20700. Total runtime with the 2600mah 18650 that was included was 145 minutes, The total runtime on the Panasonic 4000mah battery was a very impressive 260 minutes. Thats 44.2% more run time for only an additional XX grams in weight. Output curves were pretty similar between the two batteries with the main difference being that 55% relative output was about 220 minutes in length. With a 20700 battery it makes the JetBeam HR30 be the longest duration headlamp I have by a large margin. 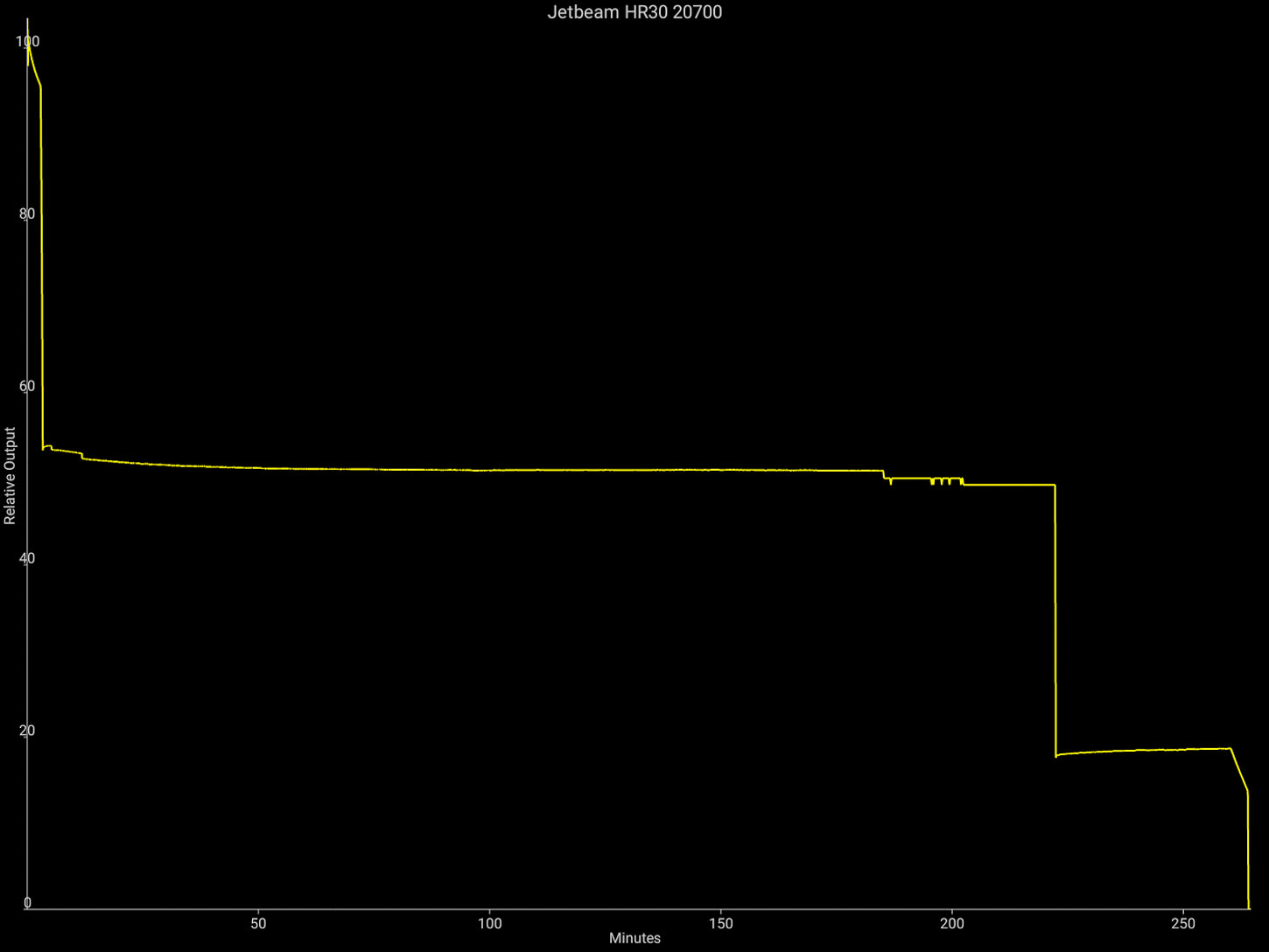 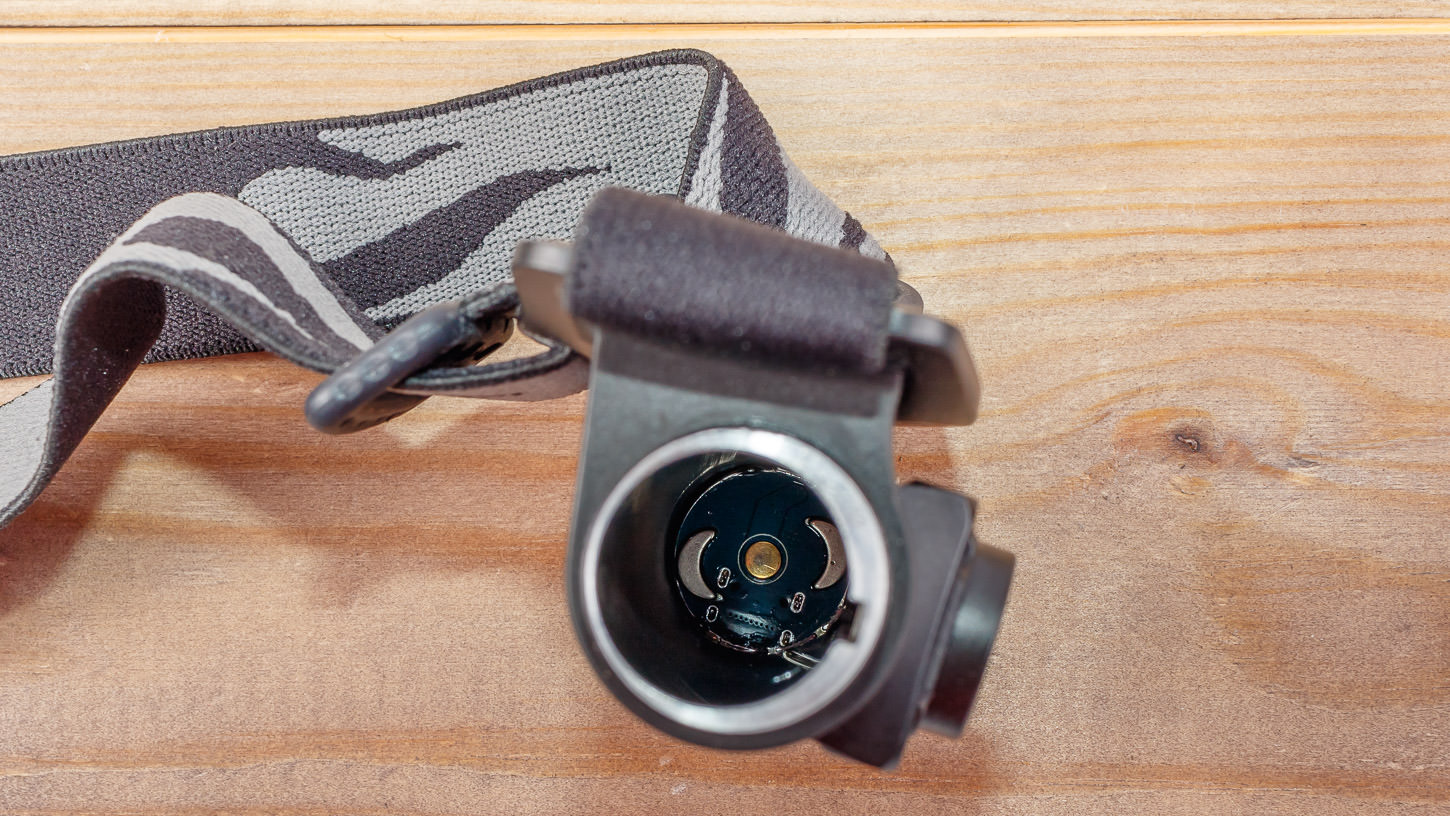 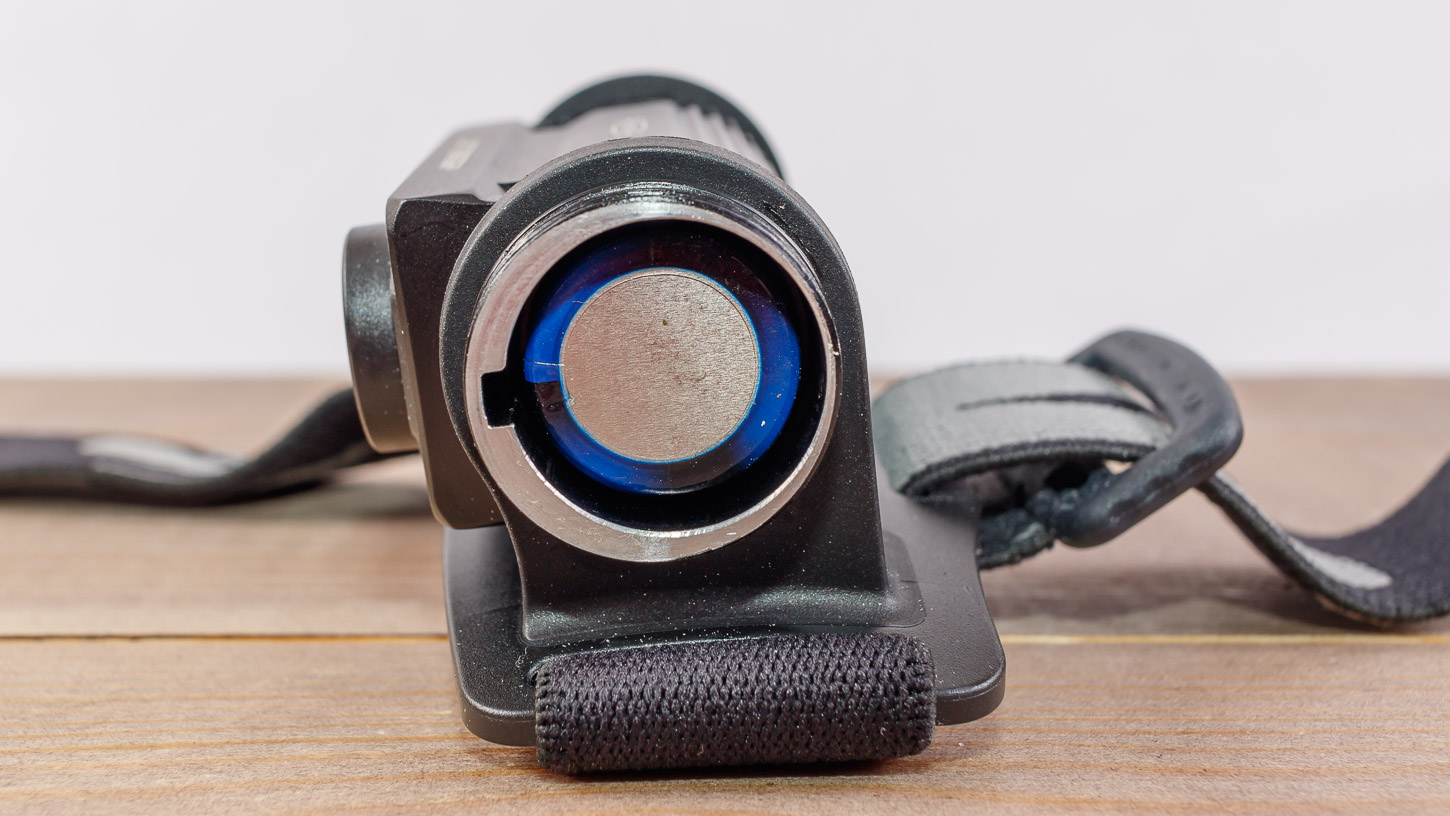 Charging
This light uses USB-C for recharging. The port is built into the threads on one of the ends. To get enough clearance you must remove the cap. It would be nice if there were more threads so you could leave the cap attached. A nice heavy duty USB 3 to USB-C cable is included with the headlamp for use when recharging.

The charging status indication isn’t my favorite. First you have a small LED near the USB-C port itself that is always green. This tells you when electricity is flowing but that’s all. During charging the light comes on in Red mode on the main LED’s and for much of the time it’s a slow flashing red mode. When finished the flashing goes solid charging is complete. Having the main red mode LED’s come on is just too much. Not only does this consume a decent amount of power it’s also very bright and annoying. It would prevent you to charge in a bedroom overnight, or in a tent if you were camping. In my opinion it would be better if they put a multi color LED at the port instead of the green and used it to indicate status.

Summary
It’s nice to see USB-C make its way to flashlights offering onboard charging. It’s the connector of choice for easier to use, higher power capabilities in this application. It’s also nice to see a headlamp add the capability to run a 20700 battery in addition to the 18650’s, and CR123. This is an application where the little bit of extra size doesn’t matter much to me but that additional runtime is valuable. 42% more runtime with a 20700mah battery over the included 18650 for only 14 Grams in additional weight is well worth it in my opinion. The HR30 has engineered this pretty well with the included spacer for 18650’s.

The UI of the HR30 takes some getting used to, with battery check being so easy to activate when you want a continuous mode instead. If you switch between a lot of different lights like I do you will probably activate it accidently. I hope that Jetbeam decides to move the red mode out of the recharging indicator and go with a multi color LED in the port instead. A few UI shortcuts to Red mode, and turbo would really improve the light too.

I would advise JetBeam to hire a native English speaker to proofread their manual and marketing materials. It seems like a basic thing but it would polish their image to be free of grammatical errors and mistakes. In today’s gig economy this is easy and inexpensive to do.

I like the HR30 headlamp and think it’s best in an outdoors setting due to the tint of the UI and the runtime that a 20700 can add. It’s built well with very good machining and a pretty attractive design. In my opinion it’s too big to use as an in pocket EDC but with the clip it could easy attach to a bag or backpack strap to light up whats in front of you.

I will have a link to the Jetbeam website on where you can see more about the light. It’s available at many retailers online too.